The Intensity of the (Quasi-)Maternal Relation in North and South

Elizabeth Gaskell’s North and South (1854-55) is known both as a love story in the Pride and Prejudice lineage, and as a social novel dealing with class conflict of the quintessentially mid-Victorian type. One of its most striking passages, though, is little remarked. It comes from late in the novel, before the final reconciliation between Margaret Hale and John Thornton. Margaret is living with her sister, Edith, and her family. Margaret has a particularly intense relationship with her young nephew Sholto:

One of the great pleasures of Margaret’s life at this time, was in Edith’s boy. He was the pride and plaything of both father and mother, as long as he was good; but he had a strong will of his own, and as soon as he burst out into one of his stormy passions, Edith would throw herself back in despair and fatigue, and sigh out, ‘Oh dear, what shall I do with him! Do, Margaret, please ring the bell for Hanley.’

But Margaret almost liked him better in these manifestations of character than in his good blue-sashed moods. She would carry him off into a room, where they two alone battled it out; she with a firm power which subdued him into peace, while every sudden charm and wile she possessed, was exerted on the side of right, until he would rub his little hot and tear-smeared face all over hers, kissing and caressing till he often fell asleep in her arms or on her shoulder. Those were Margaret’s sweetest moments. They gave her a taste of the feeling that she believed would be denied to her for ever. (Oxford, 2008, ed. Angus Easson, 405)

Who would have thought that little hand could have given such a squeeze? But the bones were well put together, and that gives immense power. What a queen she is! With her head thrown back at first, to force me into speaking the truth […].  (127)

There is also Margaret’s taming of her (initially) insubordinate servant Dixon:

[S]he, who would have resented such words from anyone less haughty and determined in manner, was subdued enough to say, in a half-humble, half-injured tone-

From henceforth Dixon obeyed and admired Margaret […]. [T]he truth was, that Dixon, as do many others, liked to feel herself ruled by a powerful and decided nature. (48)

Throughout North and South, there is a theme of dominance in Margaret’s personal relationships: she likes dominating people, and people – such as Dr Donaldson and Dixon – like being dominated by her. In case it wasn’t made sufficiently clear in the plot, the third-person narrator states it as a general truth: “Dixon, as do many others, liked to feel herself ruled by a powerful and decided nature.” So Margaret’s relationship with Sholto, and her power to subdue him, is an extension of this. It is an emotionally intense process for both parties: Sholto’s face becomes tear stained, while to Margaret the emotional affect is even more profound:

“Those were Margaret’s sweetest moments. They gave her a taste of the feeling that she believed would be denied to her for ever.”

What exact feeling is referred to? In the context of the story, Margaret has just been separated from Thornton, and the loss informs her response to Sholto. She is to be denied both conjugal and maternal relations, and this explains why she reacts so strongly. There is a certain excess in the passage, considered in the light of a (pseudo-)mother-child encounter. Margaret is somewhat too intense about Sholto. The physicality of their encounter – tears, kisses, caresses and the final swoon into sleep by the finally subdued Sholto – along with Margeret’s use of “every sudden charm and wile she possessed” recalls the conjugal relationship more than the maternal one. In this sense, Margaret is a forerunner of Henry James’ governess in The Turn of the Screw, whose lack of appropriate outlet for affection leads her into an obsessive and emotionally destructive relation with her young charges. Gaskell doesn’t imply any emotional failing in Margaret that leads to this incident, nor does she find an inappropriacy in it as a modern reader might. Indeed, this scene is not included in the popular 2004 series adaptation, and it is difficult to see how it could have been without raising uncomfortable questions about Margaret. 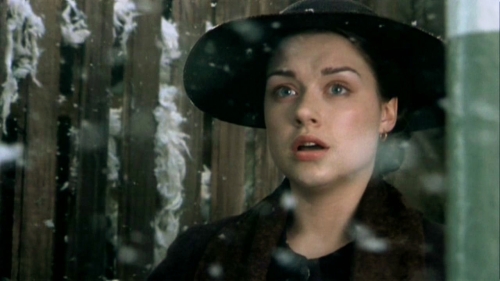 For Gaskell here seems to have anticipated a piece of Freudian knowledge abut the parental relationship:

[T]he parents — or as a rule the mother — supplies the child with feelings which originate from her own sexual life; she pats it, kisses it, and rocks it, plainly taking it as a substitute for a full-valued sexual object.  (Freud, Three Essays on the Theory of Sexuality, 1905; trans. A.A. Brill, 1920)

In a footnote, Freud acknowledges that some readers will find this contention “wicked” but cites Havelock Ellis in support. Had he read Gaskell, he might have found in North and South another reference point, a piece of Freudian psychology avant la lettre.