Ronald Howard as Sherlock Holmes in The Case of the Cunningham Heritage (1955); and the Function of Lestrade’s Stupidity

“The Case of the Cunningham Heritage” is the first episode of the 1954-55 US-produced series starring British actors Ronald Howard and H. Marion Crawford as Holmes and Watson. It is available from the Internet Archive, and so are all the rest of the episodes in the series. “The Case of the Cunningham Heritage” opens with a classic high shot of a London street replete with cobblestones, gas lamps, and a passing Hansom cab. The fetishization of late-Victorian London in Holmes adaptations was already well underway.

As the credits sequence continues, two men appear walking along the street towards us. One wears a deerstalker cap and smokes a pipe. This is of course Holmes. The other, then, can only be John Watson. As with the depiction of Victorian London, the series here opts for a fetishistic approach to Holmes, announcing him by his most well-known accessories. This is still at a time when Holmes’ manner and appearance are reassuringly familiar, but not yet problematically cliched. There is, as yet, no need for the edgy ambivalence towards, for example, the deerstalker shown in Sherlock.

As the credits cease, Holmes walks with a confident swagger. This, if nothing else, seems to reflect the American roots of the show. It is worth noting that Howard had a particular vision of his own Holmes. As quoted on Wikipedia:

In my interpretation, Holmes is not an infallible, eagle-eyed, out-of-the-ordinary personality, but an exceptionally sincere young man trying to get ahead in his profession. Where Basil Rathbone’s Holmes was nervous and highly-strung, mine has a more ascetic quality, is deliberate, very definitely unbohemian, and is underplayed for reality.

Credits over, and the first shot of the episode proper is another establishing shot of a London street, this time prosperous and suburban, bearing a carriage. Simultaneously, a narrator announces himself. In voiceover we hear a voice we can easily establish as John Watson, and the setup is derived from Doyle’s first Holmes story, A Study in Scarlet (1887): Watson is recently returned from Afghanistan; has been injured, etc. The words, however, are different, simplified, with no direct quotes from Scarlet.

The camera moves inside the carriage to show Watson’s face: broad, cheerful, middle-aged, moustached, eminently Watsonian in many respects. Newly returned to the Modern Babylon, he is looking around him with a naive curiosity which we might recognize, too, as eminently Watsonian.

It is to be several minutes before we are introduced to Holmes. First Watson meets Stamford, who sends him on his way to Holmes for a possible rent share. Stamford gives Watson that immortal detail of Holmes beating corpses with a stick. In Scarlet, Watson sees this for himself, but here he only hears it, and expresses the expected mixture of surprise and intrigue. This corpse-beating is one of the great touches that immediately and unforgettably inscribe the character of Holmes in the reader’s consciousness, but perhaps in the context of this more conventional, “definitely unbohemian” Holmes, to see it would be too much.

Watson tracks Holmes down to a laboratory, and Holmes’ classic reading of Watson from Scarlet is reproduced: “You’ve just come back from Afghanistan”, and so forth. 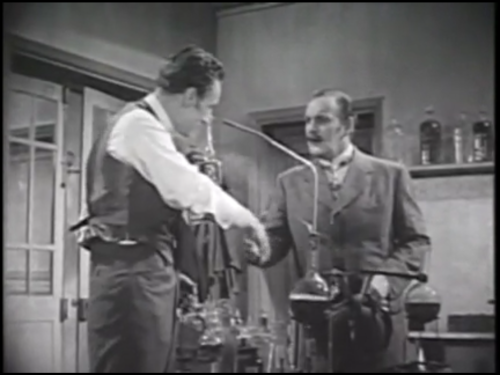 “How did you know I was in Afghanistan!?”

It is the familiar tale, a nice introduction that devotes the first third of this first episode to set up the series. It is only thereafter that the detective story per se begins. It is an original one, rather than from Doyle. The episode description on the Internet Archive says it’s very loosely based on Doyle’s “The Adventure of the Reigate Squires“, but I saw no significant resemblance. There is an important plot point towards the end that may come from “Charles Augustus Milverton“, but it is generic enough that it might have been picked up elsewhere.

The plot is unremarkable, unworthy of recap, but we get what we came from. A smart, aloof Holmes; a perennially befuddled Watson; a Victorian setting. And, also, a particularly stupid Lestrade, detectional incompetence and deductive fallacy personified. He exists for one reason alone: to be wrong – stubbornly, arrogantly, incorrigibly wrong – and thus to throw Holmes’ perennial rightness into relief. His chronic and aggressive wrongness, indeed, serves not only to highlight Holmes’ rightness, but also to distract us from the suspect methodology which often lies beyond Holmes’ deductions. That is why so many adaptations have had to ask us to laugh at Lestrade; for, were we not doing so, we would become uncomfortably aware that Holmes is a spoofer, and that the various authors, from Doyle onwards, have colluded with him in presenting his guesswork as logical virtuosity.

Lestrade: a vessel of pure wrongness in all related to criminal detection.

It is nevertheless satisfying, of course, to have Holmes’ genius demonstrated by contrast, and to see Lestrade bested by episode’s end. The individual defeats the bureaucratic might of the police, while remaining on the side of law and order. The individual can tweak the nose of authority, without having to hate it, or feel disempowered by it. The dynamic is a gentle one.

2 Comments to “Ronald Howard as Sherlock Holmes in The Case of the Cunningham Heritage (1955); and the Function of Lestrade’s Stupidity”