The age of heroes is past. In Heroes: Saviors, Traitors and Supermen (Harper Collins, 2013, kindle version loc 76), Lucy Hughes-Hallett reflects:

It is fashionable to lament the littleness of those accorded celebrity within our culture – so many footballers and rock stars and models, so few great spirits – but such collective frivolity should be cherished as one of the privileges of peace. It is desperation that prompts people to crave a champion, a protector, or a redeemer and, having identified one, to offer him their worship.

But while we might not talk about the role of heroism in public life, fictional narratives about heroic figures are enduringly popular. The superhero genre is one that is often seen as being divorced from realistic concerns, but some such narratives do indeed have their heroes deal with dilemmas recognizably drawn from contemporary political situations. The possibility of real heroism is still alive in the imagination of storytellers and their audiences.

One of the more interesting analyses of what heroism looks like in a contemporary narrative context comes from Todd McGowan’s The Fictional Christopher Nolan  (University of Texas, 2012). In this book, McGowan analyses in some depth all of Nolan’s films up to Inception, but here I will look briefly at his chapter on The Dark Knight, the second in Nolan’s massively successful Batman trilogy. The Dark Knight is an interesting film in the context of contemporary political thought, a film that provoked much critical debate and has proven good to think, as Lévi Strauss would say. McGowan introduces the various debates in initial reaction to the film. He notes that several conservative commentators saw it as a clear vindication of G.W. Bush’s “War on Terror”, while others took an opposite view. The film does not yield up its position lightly, but provides plenty of fodder for considering war, evil, heroism and terrorism in the contemporary context.

One reason why it might not yield up a position lightly is that it doesn’t have one. Indeed, Jonathan Nolan (co-screenwriter of the films with Christopher Nolan and David S. Goyer) in an interview included in The Dark Knight Trilogy: The Complete Screenplays dismissed the idea of political relevance: “[W]hen The Dark Knight was released, there was a lot of talk about the echoes and resonances with the global war on terror. He has nothing to do with that” (xiii). Nolan’s dismissal seems slightly arrogant. He didn’t write the entire screenplay for one thing, so he cannot speak for his co-writers’ intentions. And, in any case, the author does not have control over how his film is to be read. One doesn’t need to go full Barthes “Death of the Author” to affirm this. Meanings proliferate and the opposed readings of TDK confirm this. It is also rather obtuse to believe that one can create a complex narrative that somehow floats free of all surrounding political structures, cultural conditions and ideas and ideologies. In fact, if TDK did somehow manage to do this, it would be a much less interesting film.

With regard to TDK, the portrayal of the figure of the hero and this figure’s relation to the surrounding society has a distinctly contemporary twist. McGowan argues that TDK “takes as its overriding concern the problem posed by the hero and the hero’s exceptional status in relation to the law” (125). That is an ideologically problematical and dangerous feature of superhero films in general: the hero is above the law. He or she behaves like a criminal in order to protect the good as they define it. This is a large part of the reason for the persistent arguments that the superhero genre inherently tends towards fascism. McGowan males a good argument that Nolan escapes this generic trap:

As the film portrays it, the form of appearance of authentic heroism must be that of evil. Only in this way does the heroic exceptionality that the superhero embodies avoid placing us on the road to fascist rule (127).

Thus at the close of TDK, Batman is denounced as the murderer of Harvey Dent, while the evil Dent is presented as a hero. This strategy is put into play by Commissioner Gordon, who believes that a fragile Gotham couldn’t handle the truth that their beloved Dent is a murderous psychopath. Batman, on the other hand, is an already ambivalent figure, so an appropriate figure for the populace’s hate to be directed towards. Batman’s truly heroic act is not in violently punishing criminals, it is in embracing the appearance of criminality, for this is what prevents the slide into fascism and this is what ensures that the violent act remains exceptional. Gordon watches Batman flee into the night, and memorably intones: “[H]e’s the hero Gotham deserves… but not the one it needs right now. So we’ll hunt him, because he can take it. Because he’s not our hero.”(323) 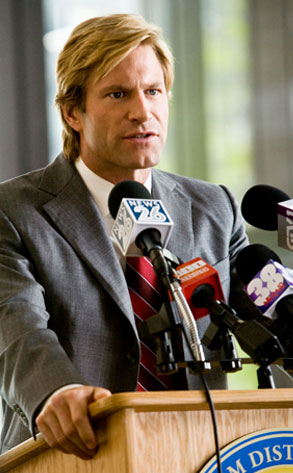 McGowan offers a novel and convincing reading of TDK. The only problem with it is, from this vantage point, that TDK was the second in a trilogy and now cannot really be read in isolation. The ending of TDK must be read as merely provisional. The film’s sequel, The Dark Knight Rises, makes a few things clear. First is that rebuilding Gotham on the lie of Batman’s evil/Dent’s heroism is a catastrophic failure. As Carlyle would say, A Lie Cannot be Believed (I discuss this elsewhere here; I also discuss the ending of TDKR in more detail here) and beneath the veneer of Dentian heroism (the necessary counterpoint to Batmanian evil), the city-state rots. Nolan’s vision in TDKR is puritanical and violent: lies must be purged, and they go so deep that the city must be destroyed. In the final act of the film, we see ranks of blue-shirted policeman take over the streets as the politicians have already been expelled from the city. The denouement of this film, and of the trilogy, is by no means so sophisticated and intellectually satisfying as that McGowan reads into TDK. But it is the real ending of this Batman saga. To adapt one of the trilogy’s most famous lines, it’s not the ending we wanted or needed, but maybe it’s the ending we deserved.

Cops ready for battle at the climax of TDKR

Taking on Fascism and Racism from the Ground Up.